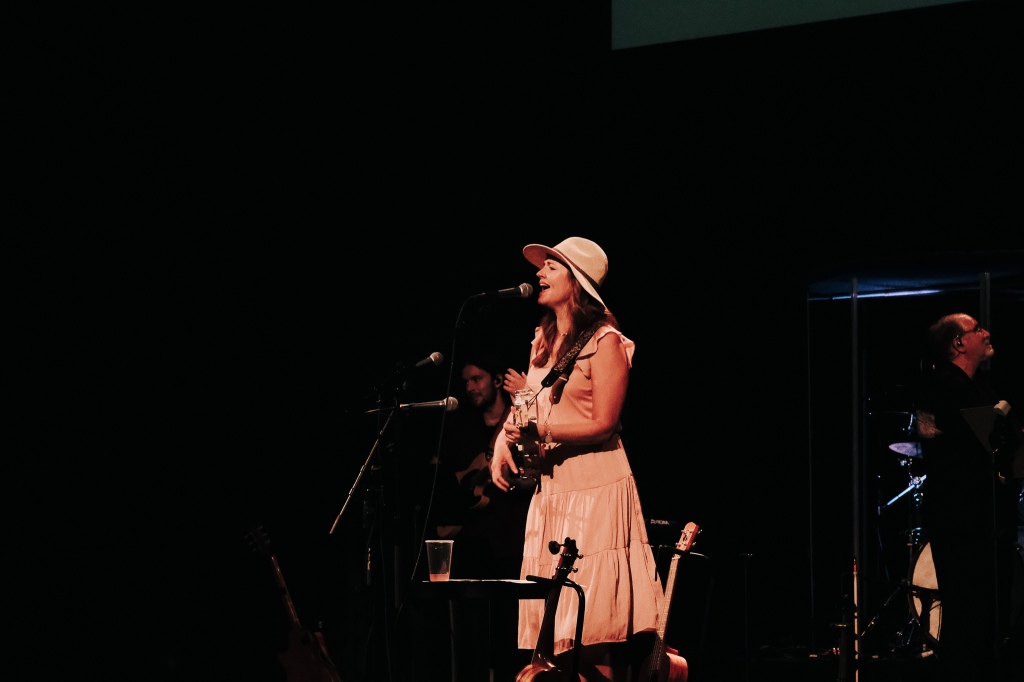 Angie Goeke is a multidisciplinary artist, committed activist, and compelling songwriter with a forte for cinematic storytelling. She’s also a mother of four who transformed her lifelong love of music into a serious songwriting career. Inspired by independent, individual artists like Ella Fitzgerald and Willie Nelson, Goeke quickly earned a reputation for her particular brand of haunting, narrative, emotionally-complex songs. Her unique compositions, which she often begins writing on ukulele before expanding for a larger band, fuse elements of classic Americana, folk, bluegrass and jazz, with her captivating vocal melodies front and center. In her debut album If I Were Honest, released in early 2022, Goeke writes songs encapsulating all the complex emotions and amorphous feelings that make life both complicated and beautiful.

Americana Highways wrote: “Angie’s emphasis is on her melodic appeal, smart words vividly demonstrated, and she’s filled her album with heartwarming tunes…and immersed them in everything that is essential to good songwriting and performance.”

Born and raised in Austin, TX, Goeke grew up in a musical family, singing with her siblings in church, where her dad was choir director and organist, and attending symphonies and local music events on weekends. She began musical training at just seven years old, singing at various studios and national choral competitions and later performing for her majesty Queen Elizabeth II when she visited Texas. She learned to play piano and continued writing songs throughout her early life, before her career path led to other creative outlets: She published a novel (A Girl and Her Warhorse), works as a theater director, teaches middle school art, serves as executive director of Not In Our City (a non-profit raising awareness of domestic sex trafficking), and is the worship leader of a local church. But it wasn’t until 2018 that Goeke decided to pursue a full-time songwriting career. “I’ve been writing songs for myself for as long as I can remember. But at some point, I just decided it was time to finally do what I’ve always felt called to do with my life,” she says. “As an artist, I’ve found tools to help express things that feel unwieldy—tools like color and sound. We need them to convey the things we don’t have words for otherwise.”

In 2019 Goeke released her debut solo EP KNOTS, establishing herself as a promising new voice in Texas Americana. Recorded at Lucky Run Studios with legendary sound engineer Michael Mikulka, the six-song collection reflects on the challenges and subtle rhythms of relationships, vacillating between upbeat, toe-tapping acoustic guitar tracks and delicate, lilting ballads backed by upright bass. The lyrics, fueled by the richness of Goeke’s own life experience, connect with listeners in raw and visceral ways, drawing comparisons to artists like Lori McKenna, Brandi Carlisle, and Ellen Starski. In 2020, stalled by the pandemic but resolved to continue making music, Goeke released a new single each month via streaming platforms before returning to the studio to work on her first full-length album.

Goeke’s debut full-length album If I Were Honest presents a stunning, atmospheric Americana collection that melds the many facets of her creative and personal life into one cohesive, elegant whole. Recorded in Nashville and produced by Mary Bragg, If I Were Honest celebrates the enormous complexity of being human, with a spectrum of sounds ranging from textural and cinematic to candid and nostalgic.

From the single “Fly Baby Fly,” written for her children, to “Whiskey in a Teacup,” a sassy, empowering anthem that speaks to strong introverted women everywhere, the songs provide vibrant, engaging insights into the mind of a multifaceted, wildly creative woman. “This album was a way for me to identify and reconcile all the different parts of myself. I’m a mom and an artist, a quiet church-goer and a girl who loves a good cocktail. These things aren’t in opposition to one another, but I had to learn that. They’re all valuable—because they make me who I am. I don’t have to let go of one thing to grab hold of another.”

Join 1,690 other followers
Thanks for visiting my site :)
Loading Comments...