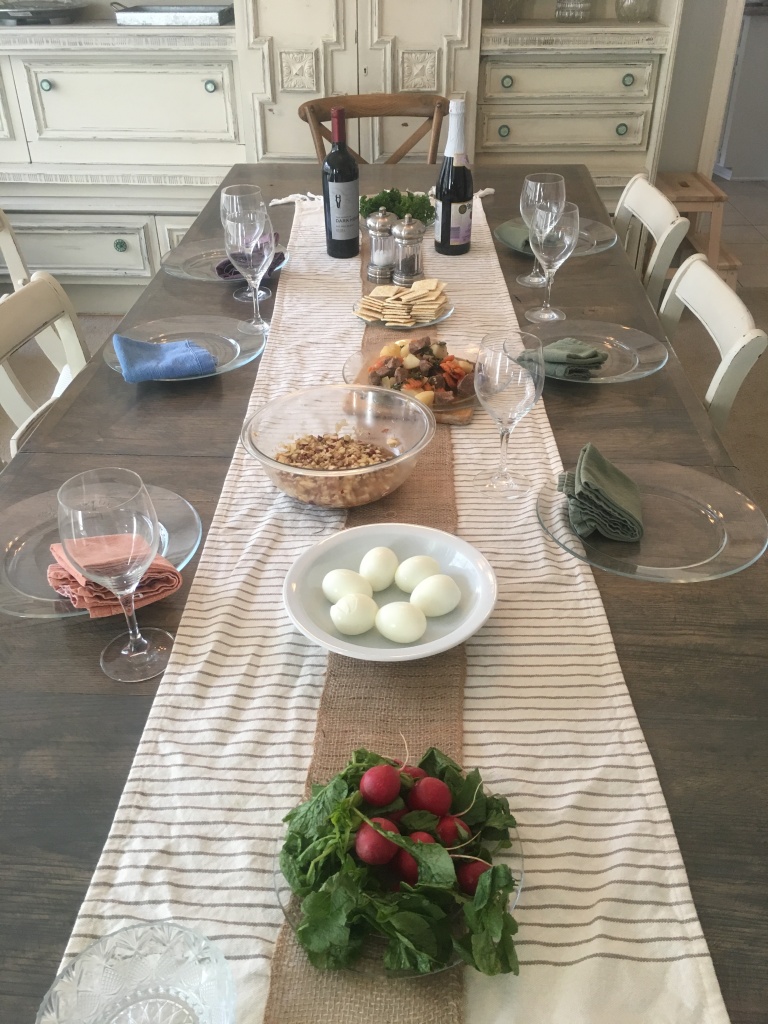 I’m getting back to the blog today after an extended absence to share one of my family’s favorite traditions:  the Seder Meal.
Let me throw a little disclaimer out first:  This is a Seder Meal that has evolved over the years for our very busy, over-extended ministry-driven family.  In fact, this year, I wasn’t planning on even doing it.  But my kids seriously ask every year at Christmas, “Is this when we have a Seder Meal?”
We attended a church during our time at the Seminary that would host a Seder Meal for the whole congregation, and it was really a beautiful thing.  But, Lord have mercy, as a pastor’s wife, I can’t imagine adding another night at church or another thing for my husband and his staff to plan.  I have really come to appreciate the intimacy of this being a family tradition.  Historically, this meal happened in homes with family.  There is something special about honoring that element of the ritual.
So, even though our week has been packed with Easter preparations for church, a wedding and a funeral, and both vehicles in need of repair,  I decided we would squeeze in this little tradition.  And I am so glad I did.

WHAT IS IT?
Simply put, Seder is the Jewish ritual feast that marks the beginning of Passover.  It is a meal full of symbolism to remember how God delivered the Israelites from years of bondage and slavery as brick makers in Egypt.  For Jews, it is a meal that celebrates freedom and the hope of the Messiah.  For Christians, this meal recalls all that God had done to free His people and marks the meal that Jesus had with His disciples the night He was betrayed.  Another layer of symbolism is added for Christians as we see Scripture reveal that Jesus IS the Messiah, the long-awaited King, and the Lamb that was slain for freedom from our sins.  It is a meal of freedom, for freedom.  Isaiah 61:1-3

Here are the basic parts of the meal and their meaning:
• Beitsah (Hard boiled egg):  The egg symbolizes the desire for freedom from which hard labor gives birth. Galatians 5:1
• Karpas (Parsley or Boiled Potato): A symbol of springtime, to be placed in salt water, a sign of the tears that need to be shed before joy can be experienced.  Exodus 2: 23, Psalm 116:8, Revelation 7:17
• Charoseth:  A mixture of apples and walnuts resembles the mortar which the Israelites were forced to make without straw when they were slaves in Egypt.  Exodus 5
• Maror (Bitter herbs like the radish, some use horseradish): represents the bitterness of slavery.  Exodus 1:8-14
• Matzah (unleavened bread) aka: saltine crackers:  When the Israelites were told that they would be leaving Egypt, it was done in haste.  They were instructed to make bread without yeast, because there was no time for the bread to rise. Exodus 12:33-34, Exodus 13:3
• Zeroah (roasted meat):  Symbolizes the sacrifices offered in the tent or the temple for the forgiveness of sins.  The Israelites were also asked to sacrifice a lamb and eat it before leaving Egypt.  Exodus 12
• Wine:  I’ve found a variety of meanings for the wine over the years.  It is enjoyed to honor the Lord and recognize His blessings.  It resembles the first plague (Exodus 7) in which the Nile turned to blood and the last plague: the blood of the lamb that was spread on the doorposts by the Israelites so that death would pass over  them in the final plague on the Egyptians(Exodus 12). (Where we get the term “Passover” Meal).  And for Christians, it can represent the blood of Jesus on the cross.  Matthew 26:26-29

HOW?
Like I said, I wasn’t planning on doing the meal at all this year.  Some years, I’ve prepared for a whole week beforehand.  This year, I decided I would have the meal the morning of, as I was doing other shopping at the grocery store.  It can be as simple or complicated as you want.  I am going to share the condensed version that is time and budget friendly.  So first, here’s the shopping list (for a family of 6…):

• 1 bunch radishes
• 1 bunch parsley
• 6 Russet potatoes
• 2 carrots (I just bought a bag of carrot chips and used half)
• 2 stalks celery
• 1 onion
• 2 red delicious apples
• 1 small bag of chopped walnuts
• honey
• cinnamon
• dried spices (Basil, Thyme, Oregano, salt and pepper)
• 2 lbs lamb stew meat
• 4 cups beef or chicken broth
• 6 eggs (one for each person)
• sparkling non- alcoholic wine for the kids
• red wine for the adults
• cooking wine (I used an open bottle of one I received as a gift…it was apple pie wine…very odd by itself, but worked well with the lamb.  Therefore, I am convinced that the kind of wine doesn’t really matter.)

RECIPES:
Charoseth:  Core and dice the apples.  Add the package of walnuts.  Sprinkle with cinnamon.  Add about a 1/4 cup honey, or more to taste.  Stir and refridgerate until ready to eat.  Adding raisins is yummy if you’re into raisins.  (If you have leftovers, it’s great to add to pancake batter for yummy apple cinnamon pancakes for a Good Friday or Easter Saturday special breakfast.)
Lamb Stew:  When I got home from the store, I immediately started on the lamb.  Over the years, I’ve had trouble finding and cooking lamb.  We’ve done everything from a lamb shank that was incredibly hard to find and was so small that we ended up making hotdogs for everyone afterwards, to just roasting a chicken because I couldn’t find any lamb.  The lamb has always been tough to eat, so this year I tried something different and everyone agreed it was the best so far.  But don’t get caught up in the details…the goal here is to have roasted meat of some kind.
Because I was short on energy and time, I used the crockpot.  And the meat was so tender, I don’t think I will do it any other way.
In a slow cooker add:
• lamb stew meat (I lightly browned mine first in olive oil and minced garlic)
• carrots (again, mine were cut in chips)
• chopped celery
• 1/2 sliced onion
• 1 cup cooking wine
• 4 cups beef (for red wine) or chicken broth (for white wine)
• 1/2 tsp cinnamon
• 1/2 tsp basil
• 1/4 tsp oregano
• 1/4 tsp thyme
• salt and pepper to your liking
Cook on high setting for an hour and then add:
• peeled potatoes cut into large pieces
Cook for another 3-4 hours then add:
• A few stems of the parsley
(If you’ve got time, and didn’t grocery shop the morning of, you can do all this on a low setting for 6-8 hours and have even more tender lamb.)
Saltwater:  It’s easy to forget this element of the dinner.  Just put salt and water in the microwave, stirred until the salt dissolves.    You can do individual little bowls for everyone (because everything ends up being dipped in the saltwater and that’s kind of a germ-y thing with 4 kids.)  Or, just put one bowl of salt water on the table.

THE TABLE and THE RITUAL:
We’ve done this different over the years, as well.  We’ve plated all the parts of the meal for each person (in a circle) and then explained what each item represented.  Some years have been very formal with candles lit to represent Christ as a light in the darkness.  Other years, we’ve also just set everything on the table (family style) and as we pass stuff around, explain what each dish resembles.  At times, we’ve read the Scriptures listed above with each element of the dinner.
Last night, we were limited on time because I had to be at church in the evening, so we just all started digging in and we asked the kids to remind us what each part of the meal represented.  (Which was pretty cool to see what they remembered from past years).
I hope sharing this makes your own Seder Meal a less-burdensome endeavor.  There is something meaningful and fantastic about taking time, especially out of possibly the busiest week on earth for us, to remember the rich symbolism and history of our faith.  In a very real and tangible way, we can see and taste our God as Rescuer and Redeemer.  We connect ourselves with the Israelites and acknowledge in a very real way that the God of Exodus and Numbers is the same God of today.  We get wrapped up in the story of redemption.  The tradition is not man-made, but God-given.  He told Moses to instruct the people to celebrate Passover and to remember that He is the God who saves.   God is good to give us such a gift.